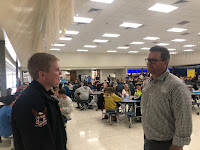 Columbia School District is pleased to announce that we have a new police liaison officer to work with our students and staff to continue to increase safety within the district.  Officer Theodore (Ted) Breijak grew up in the Jackson area and graduated from Michigan Center High School in 2014.  Following high school he attended college at Ferris State University.

During college Officer Breijak played saxophone and oboe in the Ferris State University athletic pep band.  He used his skills in music as a student conductor trainee for a year with the pep band.  He received a small partial scholarship for his participation and leadership in the band.  While at Ferris State University he was also an assistant manager for the fast food restaurant, Kentucky Fried Chicken. 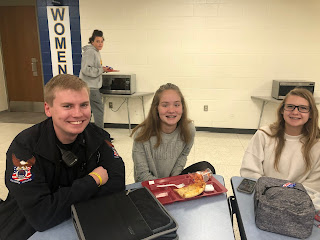 Officer Breijak became a police officer because he likes working with the community.  Coming from Michigan Center, he enjoys participating in community activities and getting to know the people in town.  His first position following his graduation from Ferris State University was at the Jackson City Police Department.  Although he learned a lot about being on a police force and enjoyed working in Jackson, he missed being in a rural community.  He worked last summer for the Mackinaw island Police Department.  Officer Breijak found his summer experience on Makinaw Island interesting.  Officer Breijak said that he enjoyed his time immensely with the Mackinaw Island Police Department during the summer of 2019.  He was able to take the position as the Columbia Township Police Department Columbia School District liaison because his time at Mackinaw Island was only a summer job.

Officer Breijak said that he became a police liaison, “because I enjoy working with kids.  I am not that much older than the students so I relate to them.”  He continued by saying that he is interested in working to “develop my skills in juvenile relations, through his work at the Columbia School District.”