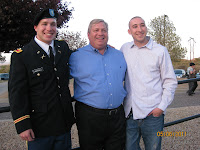 When I began thinking about the meaning of Memorial Day, I realized that the meaning has become all too real for many families across the country who have lost loved ones in service to our country. Please join me in praying for our service men and women and their families. Please pray that they might follow Christ as we read in Matthew 4:19a, “Come, follow me” and that they will take a stand for Christ as we read in Ephesians 6:11, “Put on the full armor of God, so that you can take your stand against the devil’s schemes.”

Thinking about and praying for our service men and women has become very real to me this past year. My son Jonathan (above) received a ROTC scholarship for college and graduated last May. He is currently serving in the Army as a Second Lieutenant in South Korea. I think about him and all of the other members of the armed forces on a daily basis. As I continued to think about our service men and women and Memorial Day, I came across a letter written by Georgette Frank whose son Lance Cpl. Philip Frank, 20, was killed in Fallujah by sniper fire on April 8, 2004. I thought I should share this essay she wrote on the real meaning of Memorial Day.

In the past I would look forward to Memorial Day. It represented the beginning of the summer season at the Jersey Shore and a three-day weekend.


Then we lost our Phil in Iraq.

Memorial Day has now become a day of reflection and remembrance. It is a day to remember all of our Fallen Heroes from all of the wars. It is a day to think about the families that will forever grieve for their lost loved one. It is a day to be thankful to those who have served and made the ultimate sacrifice. They fought and died to win the freedom and democracy that we Americans cherish so dearly. They also fought and died to bring that same freedom and democracy to the people of other countries as well.


As the family of a Fallen Hero, we are so proud of our loved ones who knowingly put themselves in harm's way so that they could make a difference in the lives of others.


"I want you to close your eyes and picture in your mind the soldier at Valley Forge, as he holds his musket in his bloody hand.

"He stands barefoot in the snow, starved from lack of food, wounded from months of battle and emotionally scarred for the eternity away from his family surrounded by nothing but death and carnage of war. He stands though, with fire in his eyes and victory on his breath. He looks at us now in anger and disgust and tells us this. ...


"I gave you a birthright of freedom born in the Constitution and now your children graduate too illiterate to read it. I fought in the snow barefoot to give you the freedom to vote and you stay at home because it rains. I left my family destitute to give you the freedom of speech, and you remain silent on critical issues, because it might be bad for business. I orphaned my children to give you a government to serve you and it has stolen democracy from the people.


"It's the soldier, not the poet, who gives you the freedom of speech.


"It's the soldier, not the campus organizer, who allows you to demonstrate.


"It's the soldier, who salutes the flag, serves the flag, whose coffin is draped with the flag that allows the protester to burn the flag!

"Lord, hold our troops in your loving hands. Protect them as they protect us. Bless them and their families for the selfless acts they perform for us in our time of need. I ask this in the name of Jesus, our Lord and Savior. Amen."


Take a moment this Memorial Day to share the pride that we, the families of the Fallen Heroes, feel.


Georgette
Posted by Dr. Pam Campbell at 11:28 AM No comments:

A couple of weeks ago I was driving to school heading into a storm. The sky looked as though it had been hand painted with various watercolor shades of a beautiful slate gray color. I could almost imagine seeing the hand of God with a paintbrush, painting the clouds across the sky. It was such a beautiful sight and knowing that the clouds were poised to release torrential rains any minute that I thought about God and His majestic ways setting the clouds in the sky. I thought about how God uses beautiful, ominous clouds to provide rain to nourish the earth. It made me think of Psalm 147:8, He covers the sky with clouds; he supplies the earth with rain and makes grass grow on the hills.


Today is the last day of school for the Class of 2012! We will miss them. Please pray for our students as our seniors go to Washington D.C. and our juniors go to Gettysburg next week. Our sophomores and freshmen will participate in service projects around the greater Lansing area next week
Posted by Dr. Pam Campbell at 1:50 PM No comments:

Last week I had the distinct pleasure to work with five of our graduating seniors as they created, wrote and recorded several radio advertisements for Smile FM. They were pleasant, kind to each other and wonderful to work with. One of our parents, Becky, helped us record the advertisements. After working with us for over an hour, she sent me the following message: "Also, let me just say what pleasure it was to work with Miah, Austin, Heidi, Erin and Stephen, my goodness but they are impressive all the way around :). I think you had the poster children for LCS right here – we should have shot video! They are shining examples and it was a pleasure working with them."

I would like to share with you some of their thoughts about LCS:
Please join me in praying for our terrific seniors as they graduate and step up to their next challenge. Our students have grown into wonderful Christian young men and women! It was so inspiring to work with our students that it reminded me of Colossians 1:10, So that you may live a life worthy of the Lord and please him in every way: bearing fruit in every good work, growing in the knowledge of God.
Posted by Dr. Pam Campbell at 7:32 PM No comments:

As Christians, we have the opportunity to build our lives on the Rock! Our day-to-day activities are shaped by our desire to have a solid foundation built upon Jesus Christ our Savior! As the final planning takes place I look forward to seeing the final choice for the summer camp theme and, of course, the T-shirt! Please join me in praying for those who are preparing to work with our children through the LCS summer camp program.
Posted by Dr. Pam Campbell at 12:27 PM No comments: