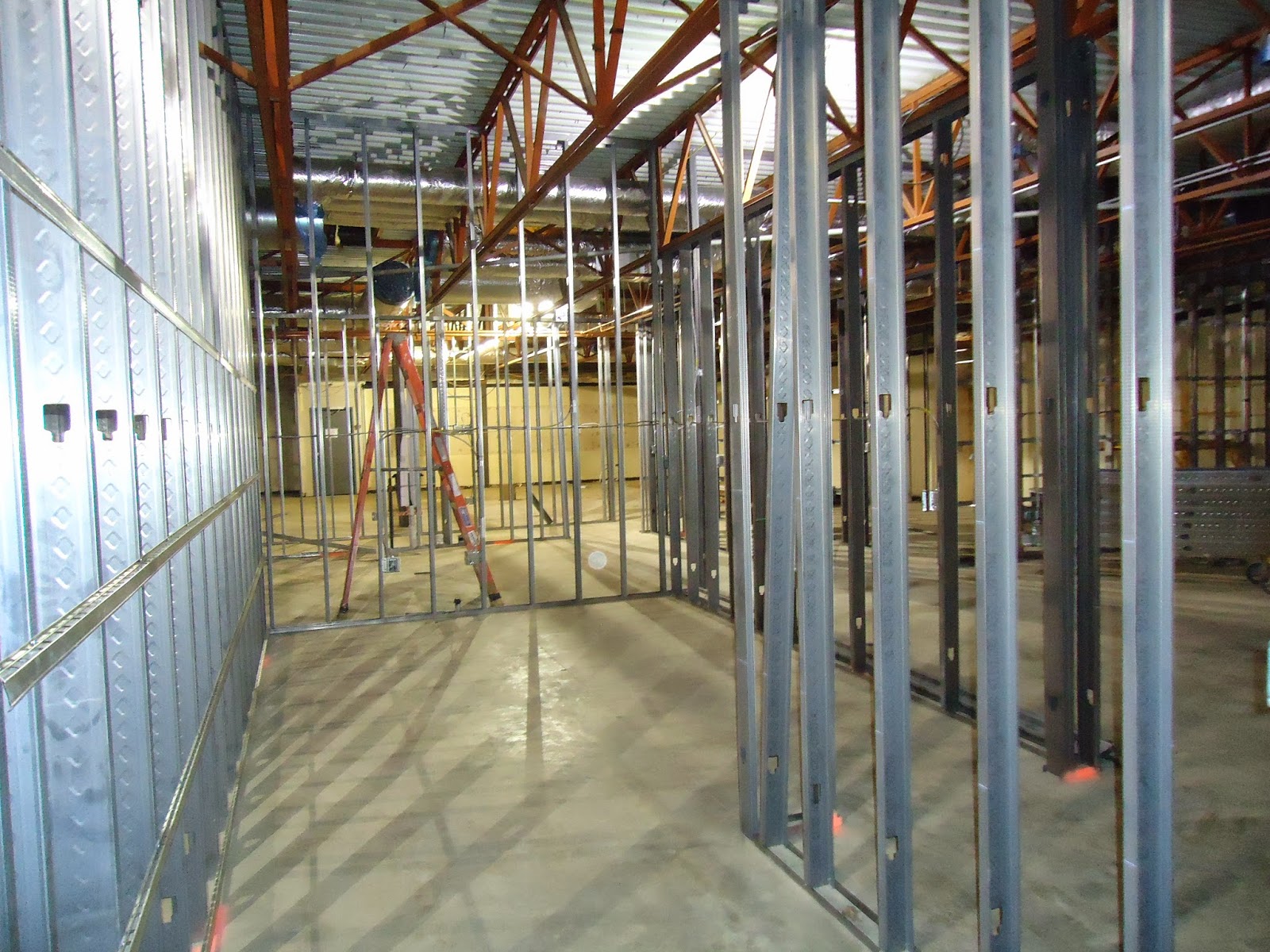 Recently I watched a home renovation program on the television.  It was interesting how the people looked at homes that were in poor shape, and then through the magic of television in a half hour, the home was completely renovated and looked like new!  They tore down walls, replaced windows and doors and painted everything.

On December 1st at Columbia Central High School we embarked on a gigantic renovation.  Currently the renovation of Columbia Central is focused on the southeast wing.  Much like the television renovation programs, we tore down ceilings and walls, removed windows and doors, and in a month will be painting the new walls.  Initially, the construction workers focused on demolition.  They tore down walls, gutted restrooms, and removed old dusty duct work. 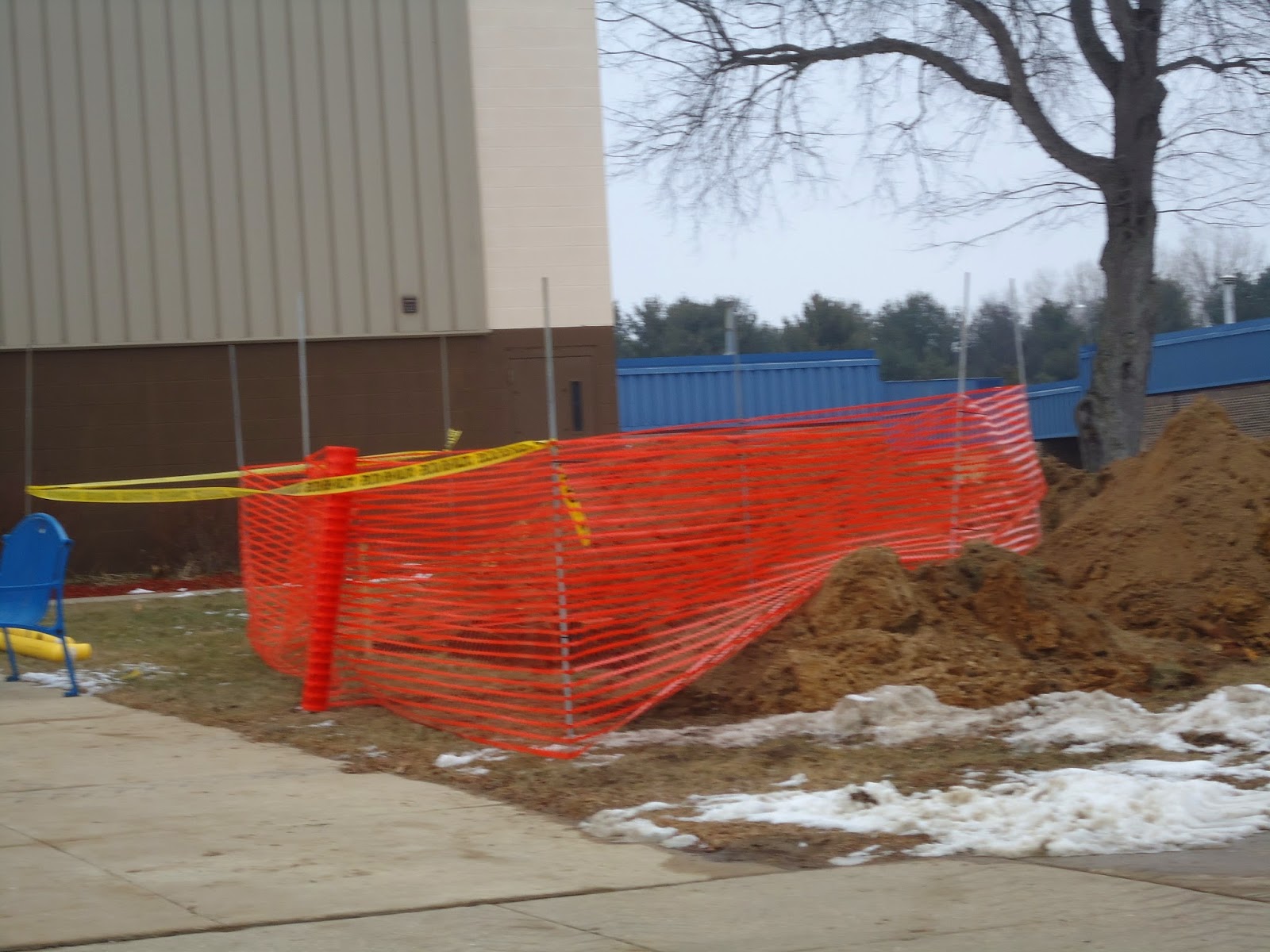 On one occasion I was checking on the renovations and in one area the heating and air conditioning workers were putting up ducts, while in another area the demolition crew was preparing to break through a block wall.  It has been amazing to follow all of the updates and renovations.  Over the past couple of weeks, the duct work has been going up, and the studs for the walls are being installed.  At the end of last week Consumer’s Power began their work moving a gas line south of the Columbia Community Fitness Center.  The move will make room for the new locker rooms for the seventh and eighth grade students.

In April the renovations will move to the band room, the choir room and the psychology classroom.  Beginning in June the balance of Columbia Central High School will go under extensive renovations.  The doors and windows will be removed and replaced, the electrical and technology infrastructure will be upgraded, and there will be new heating and air conditioning units and duct work.  This summer there will be site work performed at Columbia Central High School to separate parent drop off and bus traffic in addition to upgrading the parking lot, the tennis courts and the track.

Columbia Elementary, Middle and Options will also undergo extensive renovations beginning in June.  Renovations will include the installation of new heating and air conditioning, new windows and doors, updated plumbing and fixtures, and upgraded electrical and technology infrastructure.  Much like the excitement we see on the faces of the participants in the renovation television programs, our community members, students and staff members will feel a renewed sense of pride following our school building makeovers.

There are already new technology devices that have been purchased at Columbia Schools.  Both Columbia Central High School and Columbia Middle School have received four mobile carts of Chrome book laptops.  Columbia Elementary has iPads and will receive additional devices to be used next fall after the wireless infrastructure is updated.  Columbia Options has new laptops which are used at school by our online sixth through twelfth graders and our adult education students.  You may follow the renovation progress online by going to the Columbia homepage at www.myeagles.org and clicking on the Restore the Soar Facebook page.  If you have questions about Columbia School District email me at pamela.campbell@myeagles.org or call me at 5175926641.
Posted by Dr. Pam Campbell at 6:13 PM No comments:

Footprints in the Snow

The other day I looked out across my front yard at the crisp white snow.  Much to my surprise, many varieties of animal had made footprints in my yard.  There were rabbit, deer, cat and dog prints all intertwined in the snow.  The prints made me think about the way we follow in the footsteps of others as they lead the way into the future.

At Columbia, our teachers work together to plan the optimum pathway for our students.  They carefully mark the way to achievement by giving our students a virtual view of the footprints of those who have successfully gone before.  During their planning sessions, our teachers work to disaggregate data from student assessments and observations to ensure all of our students follow the pathway to successful accomplishment of their learning objectives.

As I visited with some of our teachers recently, one of our teachers noted that she regularly searches through lesson ideas to choose hands-on learning activities for her students.  On this particular day her students were working on a journal entry, before collecting snow for a STEM (science, technology, engineering and math) experiment.  The students, mostly five-years-old, built small snowmen and measured them.  The class worked together to investigate the rate that the snow melted into water.

In another classroom the students were learning how to report their experience investigating by singing an adventure song.  Other students, also five-years-old, were writing in their journals and sharing their snow day experiences with other students.  All of these students were excited to be learning by following the plan and the path their teacher had laid out for them.

After leaving the elementary, I had the opportunity to speak with a student at Columbia Middle School about his robotics class.  It was amazing to hear about the STEM fundamentals he was learning.  Later, I spoke with students at Central High School about the activities they were participating in through the Robotics Team.  All of these activities, assignments, experiments and investigations had one thing in common: a Columbia School District teacher had carefully planned each step to guide their students to a successful future.  Just like I was able to track the footprints in the snow, the students are able to follow their teachers’ leadership on the effective pathway of learning.

If you are interested in learning more about Columbia School District or any of our programs, please email me at pamela.campbell@myeagles.org or call 5175926641.
Posted by Dr. Pam Campbell at 8:33 PM No comments:

January is School Board Appreciation Month!

Recently I was reading about the duties and role of the school board.  In one of the websites, they depicted the work of school board leaders as “A Work of Heart”.  I had never heard that description, but it is perfect!  Officially our school board members listen to the community, make policy and set the budget.  However the magic of our school board is their “Work of Heart” activities.  Inevitably, you will see them at musicals, band concerts, and football and basketball games.  They will also be at community meetings, parent teacher conferences and the Hope Run.

Each January we celebrate School Board Appreciation Month, which is a wonderful time to recognize our school board members for the critical role they play in Columbia School District.  Their focus on their “Work of Heart” takes dedication and an extraordinarily high level of integrity.  Their service to the community includes caring for students, parents, staff members and administrators.  They carefully examine all sides of a policy or an issue prior to making a decision.  Through their decisions, they are laying a pathway for the future of our school district.

This year much of the focus of our seven school board members is on following the critical path of the school district renovations.  Many of our members have been involved since we began planning the projects through our Facility Improvement Team.  They spent countless hours walking along side community members through our district speaking with homeowners about the future improvements.  Their structuring of the priorities of our facility improvements will help keep students safe, warm, dry and technologically proficient well into the future.

The 2015 School Board is made up of seven vivacious, tenacious community members, who are: Bob Wahr, Garry Applegate, Mark Fish, Jodi Collins, Dave Slusher, Bev Fish and Michael Moore.  These seven fine individuals make up an efficient and effective board that has taken on the huge responsibility and challenge of working together to lead the way in the Columbia School District.  Their ability to work as a team will help increase the effectiveness of the district and give our students the optimum opportunity to succeed now and into the future.

As we go through the cold and snow month of January, please join me as we celebrate the continued commitment of the Columbia School Board members by telling them “Thank You!” for all of their hard work and determination.  You too may become involved as a volunteer and make a difference in the lives of our students through our PTOs, booster clubs, Buddies Reading program, athletic programs and Grandparents for Greatness.  If you are interested in learning more about Columbia School District and our programs, please email me at pamela.campbell@myeagles.org or call me at 5175926641.
Posted by Dr. Pam Campbell at 5:14 AM No comments:

The other day I was looking at some rocks in my grandmother’s collection.  She had big rocks, and small rocks.  There are rocks that had been polished and some are in their natural state.  There are various types of rocks including agates, Petoskey stones and Tiger’s eyes.  The rock that attracted my attention was the purple geode.  Geode means “earth-like” and it is an egg or spherical rock, which in this case is split into two halves.  The geode from my grandmother’s collection has sparkling purple amethyst crystals of different sizes and shapes, and each one is impressive and shines in its own way.

As I examined the geode it reminded me that our students are like crystals, some are small and some are big, but they all sparkle and shine.  Just like the way each crystal is beautiful and plays a part in the entirety of the geode, our students work together to support learning and growing in their Columbia school and classroom.  Columbia Elementary Students participate in service learning activities that support their community through the canned food drive, their work in the Children’s Garden, and intensive fund raising for the Hope Run.

Columbia Middle School students shine like crystals in their community by participating in the Pay It Forward program, donating to the community food drive, and constructing Global Buckets.  Columbia Central High School students are involved in an annual can drive for the local food pantry, a blood drive through the American Red Cross, the Columbia Elementary School Buddy’s Reading program, and upkeep and care of the CCHS Memorial Garden.

At Columbia School District we value our students and their contributions to the community.  We hold them in high esteem and work to support them as they grow and mature as successful students and community members.  If you would like to learn more about the programs at Columbia School District email me at pamela.campbell@myeagles.org or call me at 5172905747.
Posted by Dr. Pam Campbell at 8:17 PM No comments: